“Where would you like to go this summer?” I asked my husband while we were finishing our weekend breakfast.

“To Paradise,” He answered without hesitation. “Paradise Inn at Mt. Rainier!”

I put down my cup of hot tea (being from Russia, I always drink hot tea, and on a plane, I ask for juice with no ice) and looked at my American husband holding his mug of iced tea.

“Why don’t we go, then? A few years from now we might not be able to enjoy it. We’ll be too old.”

And so, the plan was born. To be honest, I like making plans. In fact, I get much more pleasure from planning things than from living them. For one thing, making plans gives me a chance to learn about new places. For another, as long as I am at it, I have full control over everything: drives and flights, hotels and motels, as well as things to do and to see. In the real world, we all know, cars break down, flights get delayed, luggage gets lost, and people (including those I travel with) have different tastes and opinions — which they usually share with me. Still, every time I start anew, my heart pounds, my eyes peer into the unknown with a new luster, and my mood improves. In short, I live from one plan to another, with a few disappointments in between. 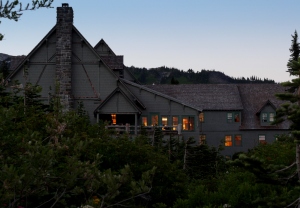 The lodge, withered by many decades of heavy snow, strong winds, and Northwestern mist, didn’t look like the grand old palace I had previously imagined but more like an elderly housekeeper weary of her years and a constant stream of guests. Yet the lobby, furnished with old-fashioned wooden chairs and benches and softened by the orange light of table lamps and light fixtures, felt warm and welcoming – until we announced our arrival, that is.

Two young receptionists looked at us with the expression that is best conveyed in a classic Russian painting of the 19th century “The Unexpected Visitors” — “Ne Zhdali” (by famous Russian artist Ilya Repin, if anybody cares to know) — which shows a political prisoner unexpectedly returning to his family home from a forced settlement in Siberia.

Despite having a reservation (from three month ago!) we were not expected either — at least not before another couple, who was put in our room because they felt claustrophobic in theirs, returned from their day hike.

“And what if they come back tomorrow?!” I said, since from my Russian experience things usually go from bad to worse. Yet the receptionists just gave me a blank look.

Nothing of the sort happened, though. While we were having dinner, the claustrophobic hikers, apparently, came back — or another unlucky couple got shuffled around — and we finally moved into the room, the size of which gave me pause, for if this was a bigger room, what size was the room our invaders escaped from? Before I fell asleep, I made a mental note for myself – never trust my husband’s affinity for historic lodges.

When we opened the curtains next morning, the sun was already up, the sky was silky blue, and people with cameras, water bottles, and backpacks were hurrying toward Mt. Rainier, towering formidably in front of the lodge. We quickly finished our breakfast, grabbed our cameras and water bottles, and joined the steady stream of mountain pilgrims. 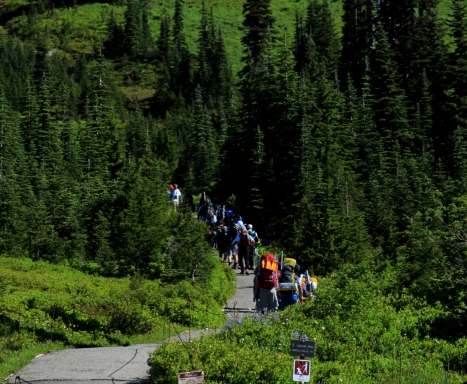 At first, we walked on a blacktop trail, then the trail turned into a gravel path, later yet, the gravel was replaced by stones, which gradually became bigger and the incline steeper, and, in about two hours, we found ourselves well above the timberline, jumping from one rock to another, crossing mountain streams, and sliding in the snow.

Back in Russia, we had an expression, “A smart person wouldn’t go to the mountain – he would go around it.” Yet there I was, panting and puffing, on my way to … Where exactly? We had no intention to climb Mt. Rainier. That would take much more vigor and adventurousness then we, two late-middle-aged people possess. Besides, the ascent is dangerous. It starts at the Paradise trail head and leads to Camp Muir, where mountaineers spend the night in tents and huts before continuing their journey through fields of ice and snow — 9000 excruciating vertical feet in all. 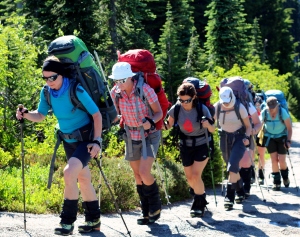 And if this isn’t difficult enough, heavy snow storms blanket the slopes without warning, blinding white outs make people disoriented and vertiginous, and plunging temperatures hit them with hypothermia.

Still, a sudden thought flashed through my mind — Wouldn’t it be cool to say, “I have climbed Mt. Rainier”? Oh, well, we were long past the age when looking cool is more important than being safe. We came here in search of paradise – a place where existence is positive, harmonious and eternal – according to a dictionary definition that is.

In real life, though, the only eternal thing is death. As for “positive existence,” high altitudes are not suitable for human life. Mere walking requires a lot of effort, not to mention carrying backpacks or suffering from slashing rain or burning sunlight. Hikers get tired, sweaty (or cold!), and dehydrated. They slip on wet rocks and fall in the snow. And yet, people of all ages, including children, keep moving up — maybe not to the peak, like those with heavy mountain packs and mountaineer boots, but as high as they can go.

Why? Because there is so much heart-stopping beauty there: the glimmering glaciers, the rugged silhouettes of the Tatoosh Range, and the dream-like shapes of Mt. Adams and Mt. Hood floating far away. Also, all around, impatient waterfalls hurry noisily to the mountain base, blooming meadows set off snow-covered fields and exposed rocks, and meandering streams whisper melodically into hikers ears. Even the thundering boom of an avalanche doesn’t break the spell of the scenery but added an ominous mystery to its allure.

As we kept moving up, something new was appearing in our view: stretches of forest interrupted by patches of snow, whimsical peaks across the valley, a marmot playing in the snow, and hues of wildflowers, fragile and hardy at the same time. And if that wasn’t heavenly enough, there were “scenic outlooks” there, too: Pinnacle Point, Panorama Point, and others. There, some sat quietly soaking the view, while others talked, took pictures, and exchanged tips with complete strangers — for the mountain brings out the best in people, even as it tires them out.

We spent three days in Paradise Inn – hiking during the day, watching the pastel colors of a dying day during the night, or taking pictures of Mt. Rainier reflected in a lake. We didn’t do anything special and didn’t set any records –

our longest hike was only five miles long (don’t sneer at this, half of it was uphill :)). Yet, as we drove back to the airport, it occurred to me — The old Russian proverb is wrong. Really smart people don’t go around the mountain, they go up – to test their abilities or to look at the desolate world about them and the familiar one beneath their feet and put things in perspective, or to contemplate their lives and losses.

And although I’ll never be able to say that I’ve climbed Mt. Rainier, I can say that I’ve been to paradise. Not the one with large and luxurious rooms, however perfect they can be, and not the realm of the blessed some hope to enter after death, but a place where natural beauty, harmony, and good spirits combine to calm, console, and uplift us while we are alive.

P.S. Paradise Inn is a historic hotel built in 1916 at 5,400 feet (1,645 m) on the south slope of Mount Rainier in Mount Rainier National Park in Washington, United States.

10 thoughts on “In Search of Paradise”