THE EDUCATION OF A TRAITOR: A MEMOIR OF GROWING UP IN COLD WAR RUSSIA 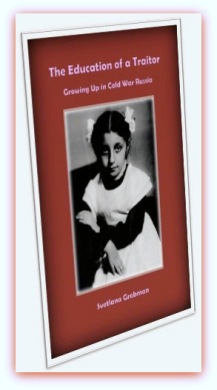 “This book may be read on several levels: either as a coming-of-age autobiography, or as a wider-ranging portrait of personal survival and growth. … A hard-hitting and involving story that delivers vignettes of change and survival using a powerful voice and a personal perspective that’s hard to put down.” —Midwest Book Review

“Each chapter functions as a stand-alone tale, depicting not only a moment in Grobman’s childhood, but also an aspect of Soviet life.  … A relatable, personal portrait of Jewish life in Soviet Moscow in the 1950s and ’60s. An intimate look at a young woman’s struggle to find her own truth in a repressive society.”—Kirkus Reviews

“The Education of a Traitor is a story of a Jewish girl, curious about life, struggling to grow in the mean-spirited and noxious atmosphere of Soviet Russia. …A fascinating glimpse of everyday life in the former Soviet Union. …Captivating …” —Eleana Gorokhova, author of Russian Tattoo

“This story turned my stomach, made me laugh out loud, and broke my heart, sometimes all in the same chapter. Grobman beautifully captures the childhood psyche in this touching story of family, the uncertainties of youth, and life in a forgotten, cloistered society.” —Readers’ Favorite

“Grobman has a brilliant gift for writing. … Humor and irony fill the pages. I  highly recommend “The Education of a Traitor” for anyone that enjoys memoirs and anyone interested in taking a look behind the scenes of the Iron Curtain.”—Reader Views

Punctuated with notable quotes and archival photographs from Svetlana’s childhood, The Education of a Traitor deal with heavy topics. Yet Svetlana stays grounded, and many of the chapters actually prove to be quite funny. —Missouri Life Magazine

Svetlana (Sveta) Grobman grew up in a communal apartment in Moscow during the Cold War with her mother, father and younger sister. From a very young age, she found herself living in two contradictory worlds: the private world of a Jewish family struggling to live a decent life in a society rife with shortages and anti-Semitism; and the public world of an oppressive totalitarian regime that brainwashed its citizen into believing that the Soviet Union was the best country in the world.

Despite being constantly bullied and insulted by playmates, neighbors, and teachers, Sveta was a dreamer.  In the confinement of her cramped apartment, with a book in her hands, she dreamt about doing something significant for her country to earn its love and respect. Yet as Sveta matured and learned about the persecution of her family and the tragic deaths of her Ukrainian relatives during WWII, she realized that the world around her was built on lies and corruption, and that she needed to be strong just to survive.

Composed of a series of poignant and sometimes humorous stories, the Education of a Traitor is a luminous memoir that not only describes the experience of one Jewish child coming of age in Russia at the height of the Cold War, but also explains why millions of people chose to leave the Soviet Union when the Iron Curtain finally fell.

My dream of publishing my first book — my memoir — has come true!  This book covers the first fifteen years of my life, but I spent five years writing it. Why so long? For one thing, I had to learn to write in English, for I came to this country knowing only Russian (and a little German:)). For another, my childhood was not happy. In fact, some of the things that happened to me then haunt me even now, and it hasn’t been easy to relive them. Yet that’s all in the past. My book, The Education of a Traitor, is out. I hope you like it. —Svetlana Grobman

Publication day of The Education of a TraitorMarch 13, 2014
The big day is here!
John Peltier
My Colorful Expressions