Both birthdays took place on Saturday: one in the afternoon and one at night. Both were birthdays of our friends: one Russian and one American. The former was celebrated in a park, in an outdoor shelter. The temperature was about 85 degrees, and when my husband and I joined the party, the guests, red-faced from the heat, were already enjoying themselves, eating home-made food, drinking wine, and talking and joking in Russian. This, of course, is the way it should be. Russian is their native language, so why would they speak anything else? Yet we were here — my American husband and I–and people began switching to English. 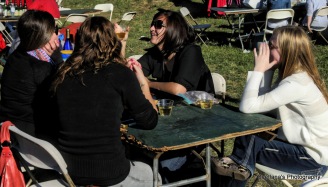 It always makes me feel uncomfortable that our arrival forces people to abandon their comfort zone. Some do it willingly, because they want to talk to my husband, and some begrudgingly–or that is how I perceive it, anyway. And there are always some who don’t care for “foreigners,” unless they are at work, in grocery or department stores, etc., so they ignore my husband altogether. Which also makes me feel uncomfortable.

This is why I go to few Russian parties, and only when I know that there will be people there who enjoy seeing my companion. Also, for the twenty-three years I spent in America, I have changed so much that, sometimes, I don’t have much to say to the people who speak my native language. In fact, I no longer speak it as fluently as I used to, and once in a while, I have to stop and mentally translate English into Russian.

Another thing is that, maybe because I’m married to an American who has two children and five grandchildren, and I work with  of dozens of Americans every day, I feel uneasy when people from my home country tell me that Thanksgiving or Memorial Day (or any American holiday) is not “our holiday.” Even something as heartwarming as Mother’s Day is not “ours” but “theirs,” so they prefer to celebrate the abstract International Woman’s Day, which is celebrated in Russia on March 8. 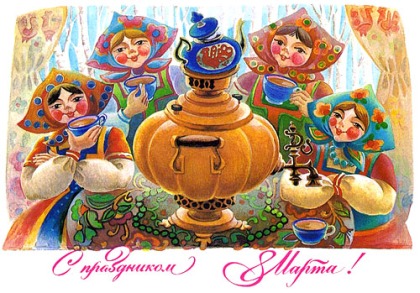 How can a woman with children say that Mother’s Day is not her holiday? As for Thanksgiving, while it’s true that Russian history is different, and pilgrims (or American Indians for that matter) are not part of our heritage, shouldn’t we be grateful to this country anyway? After all, nobody forced us to come here, and nobody stops us from leaving. So, if we decide to stay, shouldn’t we show some gratitude? I’m not accusing anybody. I know how hard it is to be an immigrant, how difficult it is to adapt to different customs and morals, not to mention another language! And I know how long it takes to make new friends, especially in middle age.

Which brings me to my American friend’s birthday party. That party was celebrated in a restaurant, and everybody spoke English, although one of the guests was (originally) from Israel and one from the former Yugoslavia. (I tend to mix well with internationals ☺). The food was brought by young waitresses, and the only cultural comparisons made were between the teaching styles of British and American academics—the Brits, apparently, tend to be less nurturing and more combative than their American counterparts.

All in all, it was a long and fun day, filled with lots of food, conversations, and laughter. So much laughter, in fact, that by the time I went to bed, I felt exhausted and almost depressed. The thing is, I’m moody. When I was young, my mother used to tell me, “Don’t get too excited, you’ll cry later.” To which I replied, “Surely I won’t!” Yet it has been true more times than I care to remember. In fact, it was true the very next day. The day we spent at a funeral.

Strictly speaking, it wasn’t a real funeral. It was a performance of Verdi’s Requiem at the Kauffman Art Center in Kansas City. During the two hours it took us to get there, I didn’t think much about the concert. I mean, I heard the Requiem several times in my past life in Russia, and I knew that Verdi wrote it on the death of Alessandro Manzoni, a writer he admired. I always enjoyed music, but I never connected it with the death of those I loved. Nor had I experienced many deaths. I lost my grandparents when I was 15 and 25, respectively. Yet they were elderly, and I was young then, and my heart was still resilient. Besides, they were Jews.  A Catholic mass, with its themes of divine judgment and punishment had nothing to do with my grief.

When we, nicely dressed, took our seats, I absent-mindedly scanned the program and looked around the audience — nothing was out of the ordinary. The bright lights dimmed, the choir took its place on the bleachers, the orchestra filled the stage, and the four soloists assembled in front. The conductor raised his hands, and the choir responded: “Requiem aeternam dona eis, Domine (Grant them eternal rest, O Lord).”

Sounds saturated the air, and time stopped, and, as if I were listening to the music for the first time, I suddenly realized that it wasn’t just sad, it was filled with such grief that my heart ached. The soloists were weaving their sorrowful laments. The orchestra, amplified by trumpets and the choir, threatened: “Dies irae, dies illa solvet saeclum in favilla (This day, this day of wrath shall consume the world in ashes”). And the Lacrimosa evoked tears: “Lacrimosa dies illa qua resurget (Oh this day full of weeping when from the ashes arises the guilty man).”

I no longer felt that I was at a concert but at my mother’s funeral, crying and drowning in bitter regret — for not calling my mother more often, for getting annoyed with her sometimes, and, especially, for not being there when she died. I felt scared, too — not because of the Last Judgment, in which I do not believe, but because I may lose more people I love.

And that is how it went — sadness gave way to fear and foreboding to resignation. A composer who died 113 years ago played with my emotions as if he were there, on stage, conducting his masterpiece. Some of Verdi’s contemporaries said that his Requiem was too theatrical. There’s some truth to that, but it was so undeniably profound, that it reverberated throughout my body and sank inside me, the way rain sinks into ground cracked from summer heat. Was it because of the exaltation and power of the music, or because of a striking resemblance between the fact that the Requiem’s first performance took place at the first anniversary of Masoni’s death, and it’s been a year since the death of my mother?

Finally, there came the tired plea, “Libera me, Domine (Deliver me, O Lord).”  It took all my will power not to sob aloud. I clutched my husband’ hand and didn’t let go until the applause broke.

“That is why I prefer Brahms’s Requiem to Verdi’s at funerals,” my husband said on our way home. “Brahms acknowledges people’s suffering but gives them solace in the end.”

True, I thought. Although, must we always be consoled and must everything be resolved?  If nobody grieves about a person’s death, was her live worth living? And why do we insist on putting a happy face on everything?  Let’s admit it, some things, such as death, cannot be repaired, nor should other things, such as atrocities, be forgiven. If we never experience grief, how can we appreciate happiness or sympathize with those who suffer? Maybe to understand the human condition, we need to experience a full range of emotions — to go from a birthday to a funeral, so to speak. In fact, this could be what Verdi’s intention was all along: to let us reflect on our lives, to make us cry, and, by doing so, prepare us for the inevitable. To deliver us — through music.

15 thoughts on “Two Birthdays and a Funeral”