I’m not imaginative. Never have been. So when I learn that the library where I work as a librarian would host a workshop “Unleash Your Imagination,” I decided that this was exactly what I needed.

On the appointed day, I joined twenty some women of different ages who crowded around a large table with a workshop leader at its head. The first thing the leader, a well-into-middle-age woman, told us to do was to relax. This made a lot of sense to me, for how can you unleash anything if you are tense? Except, I have never managed to relax successfully. As soon as I hear somebody telling me to close my eyes, I immediately feel as if something got into them, so I open my eyes wide and wink energetically. Then, something else gets into my nose and I begin sneezing. 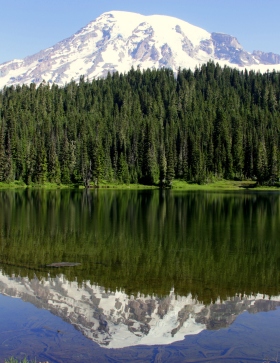 Then, usually by the time I am supposed to relax my lower body, my back starts itching between my shoulder blades and…  You get the idea.

This time was no different, so I soon gave up my attempt at relaxation and began looking around. Everybody else sat with their eyes closed and their bodies limp, and two women even had their mouths open–kind of like people who had died without anyone around to push their chins up.

Then, the workshop leader said,“Imagine yourself in a place where you feel peaceful and free. Smell the smells, enjoy the taste, admire colors, and caress the surfaces.”

Being tense myself, I had a hard time finding a beautiful place to imagine myself in, so instead, I recalled the village of Williams Bay on Geneva Lake, which my daughter, my two grandchildren, my husband and I visited a month earlier. On account of having allergies, I couldn’t really smell anything, and the only sound I remembered was the annoying cry of seagulls. As for colors, it was already dusk when we got there, so everything looked kind of gray and yellowish. Still, the grandchildren liked the beach, so it was nice any  anyway. 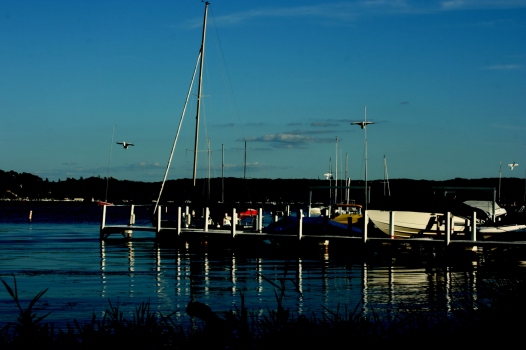 By the time I got really comfortable with my memories, our leader commanded, “Now, open your eyes and draw the scene you just imagined.” Immediately, everybody sprang to action and began drawing rather complex scenes with trees, waterfalls, and butterflies, while all I could manage was two lines:

one, wavy, for the lake, and another one, straight, for the beach. Behind the straight line, I put several small blots for seagulls and several bigger blots–with sticks indicating arms and legs–for my family. I was about to start coloring my granddaughter’s hair, when the workshop leader stopped our artistic endeavors and asked the participants to tell the group about their drawings and what they represented.

To my humiliation, everybody began sharing a paradise-like vision of herself sitting, lying, or walking in a garden with singing fountains, in mountains covered with light puffy clouds, 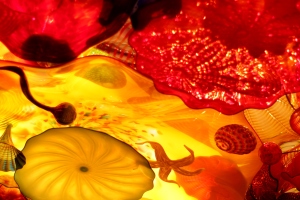 or on a boat lit by the setting sun. There was only one lady there whose imagination took her to a twisted Dali-esque landscape she had once hallucinated in a morphine-induced state while recovering from surgery.

After all the other participants had spoken, the leader’s gaze turned to me, prompting me to begin. I took a deep breath, opened my mouth, but … no sound came out, for instead of a warm and fuzzy, dream-like vision, I pictured my grandchildren running by the water’s edge, shouting, scaring seagulls, and spattering us with wet sand. Then I heard myself telling them a joke I heard earlier that day, “Do you know why seagulls fly over the sea? Because if they flew over the bay, they’d be called bagels!”

Then I saw my seven-year-old grandson turn to his younger sister, point to the seagulls flying over Williams Bay, and say, “Look at those bagels, Mary!”

And my four-year-old granddaughter, who must have decided that “bagels” was the proper thing to call these birds, ran in the direction of their flight shouting, “Bagels, bagels!”

Here, my daughter said, “She can’t understand that joke. You shouldn’t have told it,” and I said, “Well, it’s about time for her to learn about humor,” and my husband said, “I don’t think so. She’s too young,” and I said, “Not really. I told her about Winnie the Pooh and she laughed,” and the three of us began arguing about stages in child development … 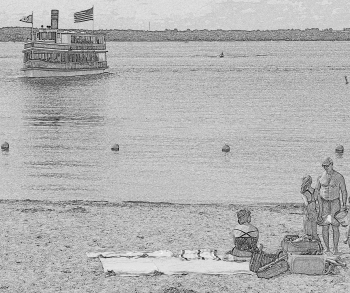 I looked at her through the cloud of my memories and, to my surprise, a sudden pain pierced through my chest, halted my breathing, and lodged somewhere between my shoulder blades. And as if I were reading the story of my life, I suddenly knew that that casual evening when everybody was healthy and good-natured, although it lacked beautiful colors, enticing sounds, or profound words, that evening was better than anything I could ever imagine. It was simple and it was precious, and it will never be repeated again…

“Sorry,” I said, shrinking under the gazes directed at me from all sides. “I have no vision to share. I couldn’t unleash my imagination. I only unleashed my memories.”

©Svetlana Grobman (and Dale Chihuly — kind of :)). All Rights Reserved