For seven days my husband, my daughter and her two children (age 14 and 11), and I crisscrossed the Mediterranean Sea. We walked on the red carpet in Cannes, admired the night view of Palma de Mallorca, visited a turtle sanctuary in Ajaccio, tasted freshly made pesto in Genova, marveled at the still leaning tower of Pisa, and learned basic steps of Flamenco in Barcelona (FYI, the most important element of  it is passion!) . Our cruise ended near Rome, where we stayed for several more days.

Rome was hot, humid, and overrun with tourists. Still, I reserved excursions there, too — a tour of the city, the Colosseum, and the Roman Forum. The Vatican was our last organized destination and I was looking forward to it.

“Tomorrow we are going to the Vatican,” I said to my family the night before. “Don’t forget to cover your knees and shoulders.”

“OK,” My daughter and my husband said in unison, while my grandchildren looked at me gloomily.

Having done a lot of sightseeing already, all they wanted to do for the rest of their vacation was “nothing,” and going to the Vatican wasn’t that. 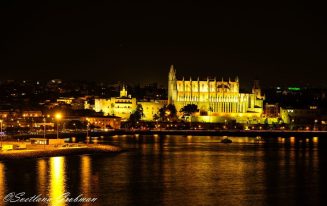 The thing about my grandson is that when he doesn’t feel like doing something but doesn’t want to admit that, he comes up with a variety of dubious excuses. Once in London (my daughter’s family lives in England), when I wanted to take him to a public library, he said, looking at me very sincerely:

“In our country, Grandma, they don’t allow children to public libraries.”

That was such an obvious fabrication that I burst into laughter. A librarian myself, I knew that although the case can be made that the Brits like their dogs more than they like their children, they surely build public libraries with children in mind.

“You’ll be OK,” my daughter said to her son. “I have your track pants.”

Here my granddaughter chimed in.

“My ankle hurts,” she said. (She was jumping all over the rented apartment five minutes earlier).

Yet, to her utter disappointment, I reached into my extensive first aid kit and pulled out a muscle relaxer, so a visit to the Vatican became inevitable. 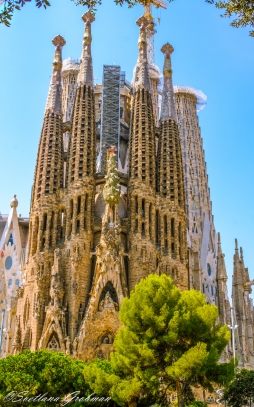 “Your tickets don’t include any museums.” Our tour guide said, looking at our reservation, and my grandchildren’s faces lit up, while their mother’s expression soured.

“What does that mean? I said. “Are you saying that we won’t be able to see the Sistine Chapel?!

“Sure,” my husband muttered under his breath. “Let’s fleece the tourists.”

Yet we paid extra and — with 30 other sightseers – headed to our destination.

At first, the tour guide showed us around the Vatican’s grounds, and then she herded us to the additionally-paid-for museums. Of course, these were not the kind of museums I was used to — with a little bit of this and a little bit of that. These were ostentatious displays of unqualified power and wealth: gold-leaf ceilings, sumptuous decorations, luxurious carriages and pope-mobiles and, of course, famous paintings and sculptures. It was overwhelming and I fully expected my husband to comment on that or to say something inappropriate. Like the time when we were in Florence, walking around Michelangelo’s statue of David, and our tour guide said, “Does anybody see anything unusual about this sculpture?”

At that point, I quickly withdrew my hand from his and pretended that I had never seen him before, while our female guide raised her eyebrows and — not 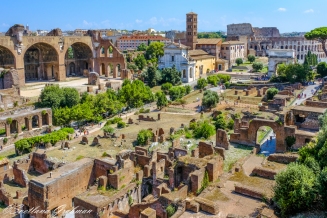 waiting for my husband’s other insights — quickly informed the group that one of David’s legs is shorter than the other, and if he were standing  up straight, we would clearly see it.

This is time, thought, a body part comment came out of the mouth of my 14-year-old grandson.

“Why did they tell us to cover our knees and shoulders?” He said looking around. “There are naked pictures all over!”

That was a very good question, but while I tried to come up with an appropriate answer, the dense crowd of visitors picked us up, pushed us through several galleries and flights of stairs, and deposited us into the Vatican’s Jewel – the Sistine Chapel.

With every inch of its surface covered with frescoes, the Chapel did look like a jewel box — or rather a jewel box filled with ants, as the visitors stood there shoulder to shoulder. My pulse quickening with anticipation, I lifted my gaze to the ceiling, fully expecting to be struck by another Michelangelo masterpiece — “The Creation of Adam.” Yet from where we entered, the famous fresco appeared backwards and I couldn’t make much sense of it. I spent some time craning my neck and twisting my body, so I could see both God and Adam the way I was used to from observing numerous reproductions, but the collective noise and heat emanating from the crowd made me feel lightheaded and I switched my attention to the walls. 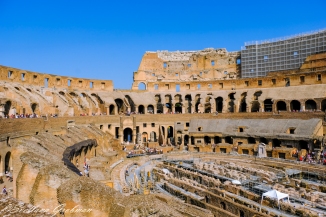 Unfortunately, the number of people pressing on me from all sides did not allow for much maneuvering. Besides, to my horror, I suddenly realized that not only did I lose sight of our tour guide, but I also lost sight of my daughter and, worse, my grandchildren! The only familiar figure I could spot in the distance was my husband’s.

The loss of my daughter in a strange city was somewhat distressing but clearly, I wasn’t in a position to save every member of my family. Therefore, I stopped looking at the frescoes and began scanning the crowd for the kids. Thank goodness! They were only twenty yards away, so I desperately pushed my way through the overheated bodies, grabbed my granddaughter’s hand with one hand and my grandson’s with the other and pulled them to the exit, toward the pennant carried by our tour guide, which loomed far ahead.

Before we exited the chapel, I glanced at the ceiling for the last time. From this direction both God and Adam looked right, and feeling relieved that I finally solved the puzzle of the creation and my grandchildren were safely in my hands, I left the building. 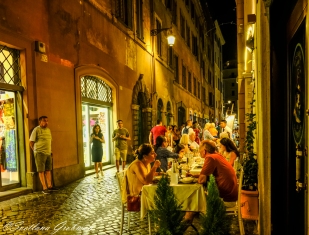 On our last evening in Rome my husband and I went to the Trevi Fountain. The night was starless, and by the time we reached the famous fountain, set against a baroque palazzo and brightly lit from all sides, it looked like a turquoise oasis in the dark desert of the night. People crowded all around it — talking, taking selfies, or just enjoying the view. So many people, in fact, that we couldn’t get close to the sparkling water — even less to toss a coin without landing it on someone’s head. Instead, we kissed. And it was a nice moment.

When we turned to leave, I noticed a young couple with two little girls just behind us. The man looked Middle-Eastern and the woman wore a headscarf. They, too, were trying to take a selfie, but the girls, who were too young to recognize the uniqueness of the moment, kept twisting and turning, making it difficult for their parents.

Had I met that family somewhere else, I would never have approach them. Had I met that man in any other crowded place, I would have put a distance between us. Yet here, by this fairytale fountain that spoke of romance, hope and goodwill, I looked at the pretty woman and the cute girls, and said:

“Would you like me to take a photo of you?”

I took several pictures, handed them their phone, and we left.

“Too bad we couldn’t toss a coin,” I said to my husband on our way back.

“Do you want to return to Rome?” He said.

The one way I would enjoy that — I realized — would be returning here all together, hopefully when my grandchildren are older and can appreciate it better. As for me, my happiness does not depend on this city or this fountain. In fact, it doesn’t depend on any patch of earth. For me, a Jewish Russian immigrant to America who lost her roots a long time ago, whose parents passed away, and whose daughter no longer lives in the same country, happiness is defined by being needed, being able to help and also being able to create memories that will live after I’m gone.

It also depends on relationships – between me and my family, among my friends, and, ultimately, among all of us humans — no matter where we came from or where we’ll go next. Or, to put it simply, on everybody following the golden rule: “Do unto others as you would have them do unto you”. 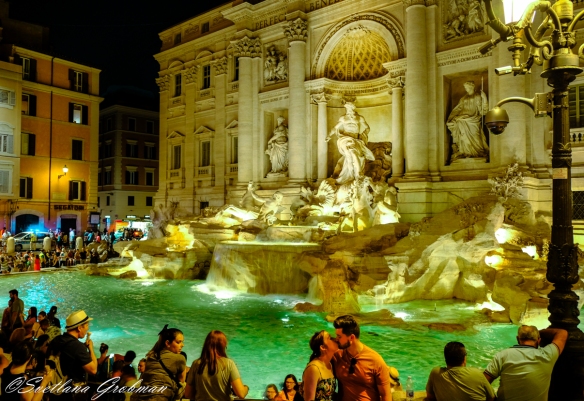