Thank you everybody who read/liked/commented on my Halloween story!  It’s so encouraging (and inspiring) for a writer to be appreciated.  You, guys, are great!  Now, I was not going to publish anything until November 15, but since we’re all waiting for the results of this election, I thought you may like my other older story, too.  Enjoy!  (I hope :))

I sighed. “Another sweepstakes.”

“It’s not a sweepstakes,” I informed my husband, wondering how my adopted country managed to survive without me during the years I lived in the Soviet Union.  The USA obviously needed me. For example, since I became an American citizen in 1995, I’ve been called for jury duty four times! I work with people who’d love to serve, but had never been called, including my mother-and father-in-law, who were seventh-generation Americans. Even my husband, now retired, has been called only once.

Similarly, when strangers telephone our house, they always ask for me, although nobody can pronounce my name. Only rarely do they want my husband with his conventional English name, Charles.

“Did anybody else receive a presidential campaign survey?” I asked my colleagues the next day. None had.

That night, I told my husband, “I have to answer that survey. It’s signed by a presidential candidate. He’s asking me to participate in the democratic process.”

“Did he also ask you for a donation?” my husband asked.

I disregarded this remark. Nobody had asked him to participate in the democratic process. Besides, he was used to democratic elections, with a choice among candidates; whereas, during my 39 years in Moscow, I never experienced such a thing.

My first Soviet election of the 1970s was a grand affair. Bravura patriotic music poured out of loudspeakers. Dressed-up people filled the sidewalks. Yet the polling place looked like my idea of purgatory – with many people going in and very few coming out. I walked inside. Several unsmiling officials crowded at the counter, busily checking voters’ passports, putting check marks by their names, and handing out ballots. Behind the counter perched an unused voting booth. The only things spoiling the bureaucratic orderliness of the voting process were the scents of seafood and noises oozing from the adjacent room, where crowds of people blocked the doorway.

“Masha, lend me some money!” I heard somebody shout.

“How much?” the invisible Masha hollered back.

Clearly, the next room was a happening place, and everybody around me thought so, too. As soon as they got their ballots, they quickly deposited their votes, and dived into the mass of bodies and tempting aromas on the other side.

While waiting to deposit my ballot, I absent-mindedly read its contents, which did not surprise anybody in the country. For every election, there was only one name on the ballot for each office, and the Soviet people were always unanimously united behind that person.

The best thing about this system was its simplicity. We weren’t bothered with phone calls or mail, we never researched our candidates (the names on the ballots rarely changed anyway), and we never had any doubt about the results – 99.9 percent of the population happily embraced their only choice.

The excitement in the next room was triggered by a buffet set up there for the election. It was covered with delicacies one wouldn’t find on any other day. Cans of caviar stood there like Kremlin turrets, packs of smoked salmon emitted mouth-watering scents, and piles of cured sausages rose like revolutionary-era barricades. In short, it was a celebration of the Soviet regime at its best.

This happened year after year, until, in the late 1980s, the Soviet economy plummeted and the assortment of election goodies dwindled. I lost my “election” enthusiasm long before that. One year, I walked into the voting booth, shut the curtain, and crossed out the only name on my ballot. The next time, I tore the ballot up. Finally, I just stopped going.

Yet, the election result was always the same – 99.9 percent approved. Actually, not voting caused me more trouble, since, inevitably, a portable ballot box appeared at my door, brought in by a grumpy bureaucrat, eager to put a check mark by my name.

My first American election took place in 1996. It was a casual affair. The polling station was in a nearby church, and the atmosphere lacked the excitement I was used to. One gray-haired volunteer checked my voter registration card, and another handed me a ballot – a document with several columns of little ovals and names. At the end, I was given an “I voted” sticker and a doughnut instead of caviar.

In recent years, I’ve voted at a school, where there are no doughnuts, coffee, or music. And yet, I do not miss the Soviet-style elections, for whatever the weaknesses of American elections, they have something I didn’t dream I’d ever see – choices.

No, I’m not naive. I know my single vote doesn’t count for much. But together with the votes of others, it has power – the collective power we pass on to our candidates, hoping that they’ll use it wisely. As for the torrent of dinnertime phone calls, campaign materials, and donation requests – I’m annoyed with them at times, but, I tell myself, “Thank goodness for democracy!” And, sometimes, I even reach for my checkbook. 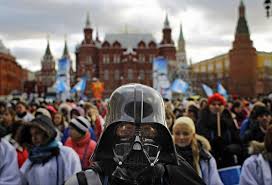 ©Writing With an Accent. All Rights Reserved